Our recent trip to Mexico was supposed to be one of sun, sand and relaxation, with none of the usual hectic shenanigans in which we usually find ourselves involved. We found an awesome deal through Transat holidays for an all inclusive trip to a brand new Iberostar hotel (Iberostar Playa Mita), and planned to spend the entire week relaxing with nothing but cocktails and beach sports.. 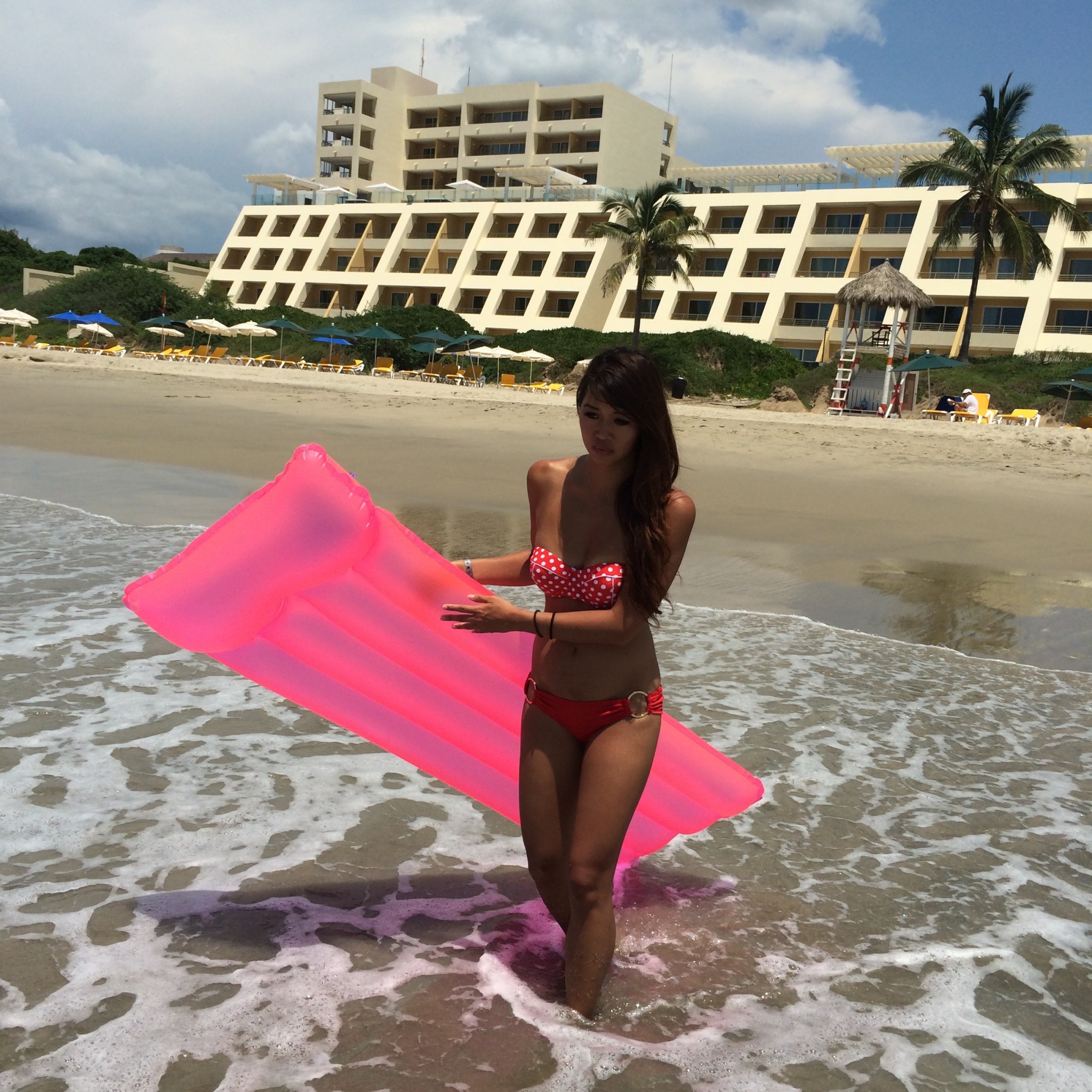 Unfortunately, shortly after we’d booked the trip we decided to do some research on things to do in the area, and it turned out that one of the things right at the top of our bucket list was almost literally on our hotel doorstep…

One year earlier, while we were living in Hong Kong, we’d stumbled across “hidden beach” or Playa del Amor (Love Beach) in an article on the world’s most surreal places and decided on the spot that it was somewhere we needed to visit. A romantic beach only accessible by swimming through an 8 foot tunnel was something we obviously couldn’t resist.

A Brief History of Hidden Beach

The story goes that in the 1950’s, the Mexican government decided to shell the deserted Islas Marietas to test their artillery. This blew several huge craters in the islands, and over following decades, the sea eroded these craters into large holes, one of which formed the famous ‘Hidden Beach’.

In recent years the island has become hugely popular with tourists, both because of the amazing hidden beach, and because of the unique local inhabitants; the most unique of these being the ‘Blue Footed Booby”, which virtually blanket the island. The island is also popular for snorkeling, although it’s definitely the top reason to trek out there. 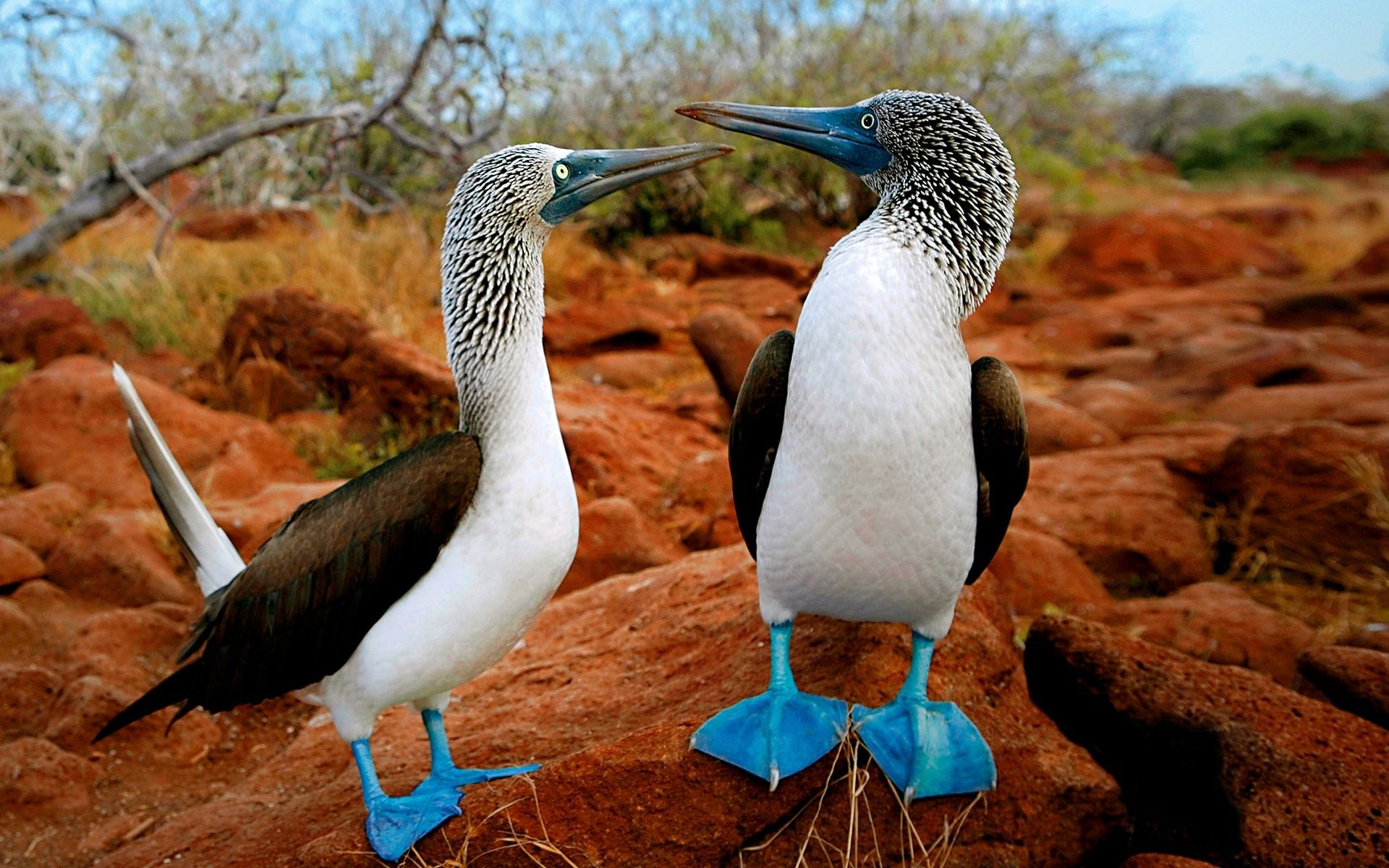 Planning our Visit to Hidden Beach

I got on the phone and called our hotel’s concierge as soon as I found out and found out what the best way to do it was. Thank god we called up and got the insider tips; what he told us turned what would have been a crowded and overrated nightmare into an incredible experience.

We were told that we had two options for getting to the island, (both with Vallarta Adventures); either drive an hour to the main city of Puerto Vallarta and take one of the two large slow moving Catamarans that held around 100 people each (trip time: roughly an entire day) or; because our hotel was so close to the islands, drive 15 minutes from our hotel to a local town, take a small speedboat at 8am and spend around 2 hours at the site (still organised by Vallarta adventures). We figured that it was crazy to waste an entire day chugging along on a cat with 200 other people, so we opted to get up before sunrise and take the speedboat.

As with everything we seem to do while we’re traveling, taking the early option paid off massively… If I could give only one piece of advice for traveling and sightseeing at popular sights, it would be; think of a time that you, as a reasonable tourist, would normally go to see the sight….. and then go waaay waaay before that. The old adage, “the early bird catches the worm” has proved true more often than not, and if you want to get the best and most natural experiences, you really have to go the extra mile and wake up before everyone else. That’s what we did with hidden beach and it really paid off.

We got to a remote pier at the crack of dawn as the local fishermen were setting up their fishing equipment, and we watched, bleary eyed, as some pelicans took off in search of their breakfast. 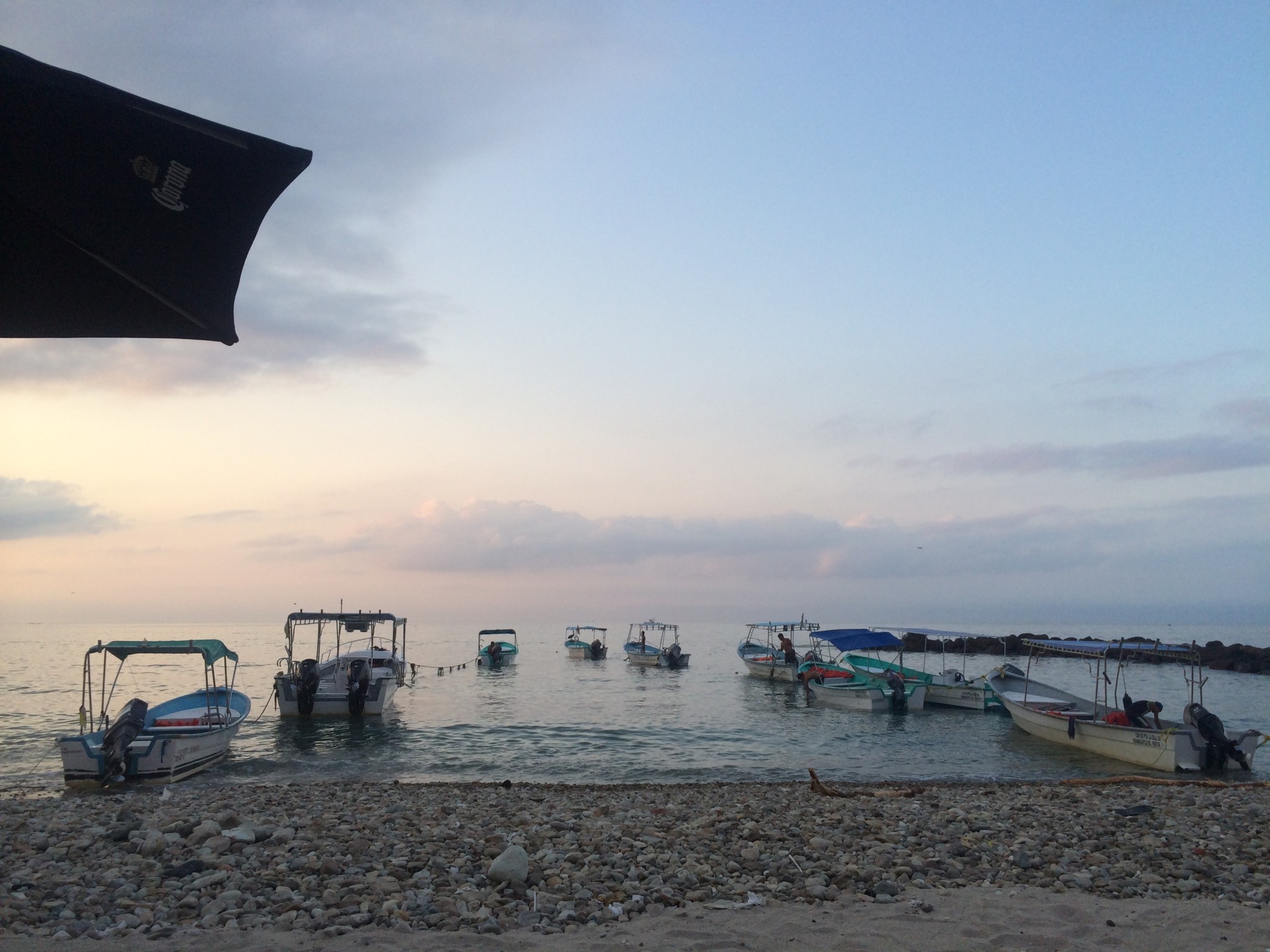 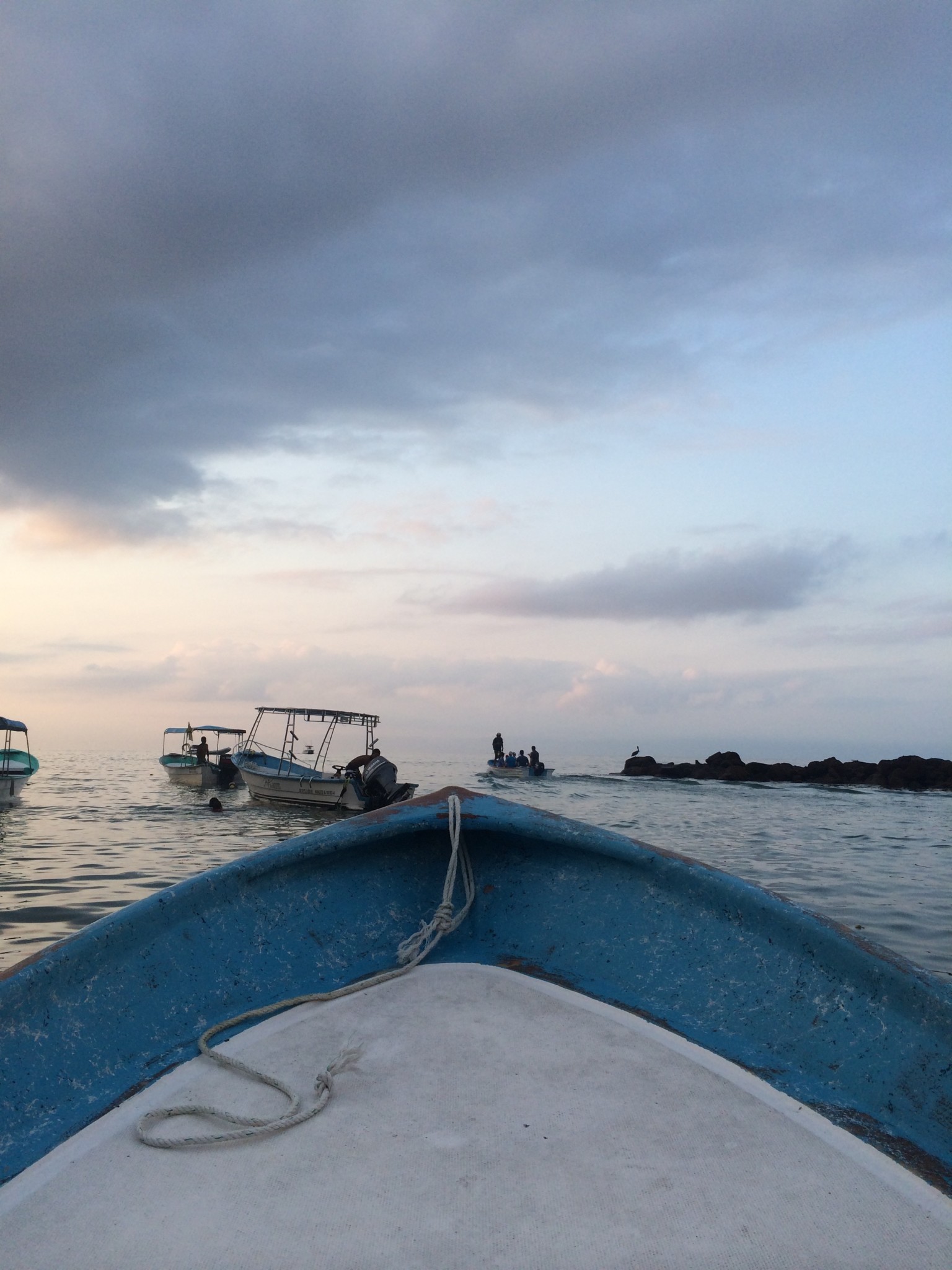 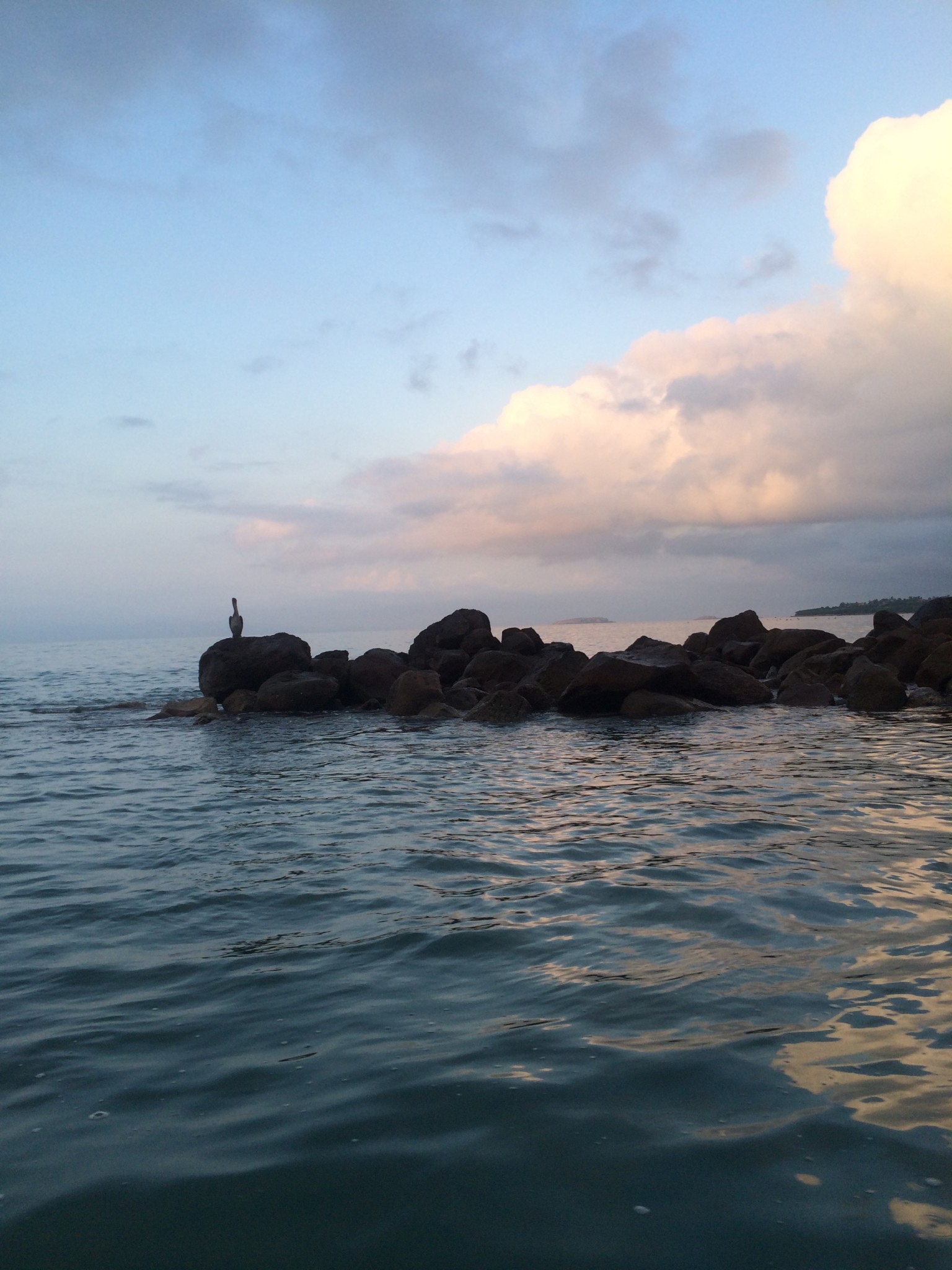 About 15 of us boarded the little rib and started the 20 minute trip out to the islands. I have to say, this is the less luxurious way to get out to the islands, and we got pretty battered by the waves and the wind. To be honest though, it was pretty awesome to be flying through the waves at high speed and I would have been bored out of my mind sitting in a slow moving cat for 4 hours. We slowly neared the beautiful rocky islands and watched them loom slowly bigger and bigger. 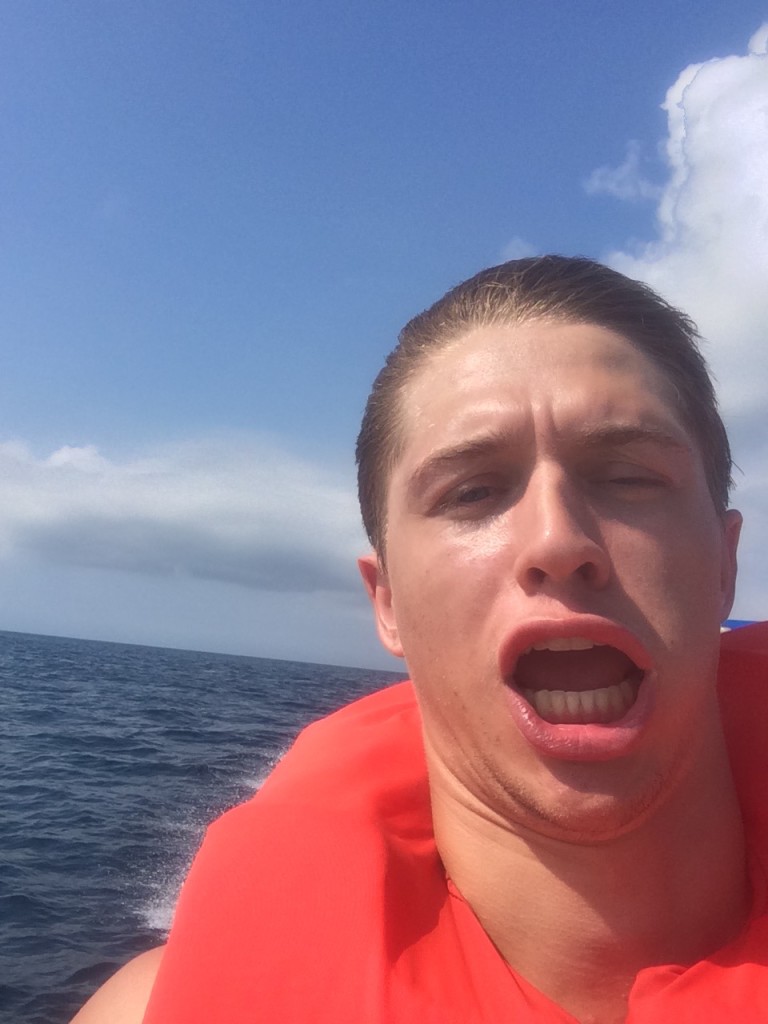 N.B. Avoid if you’ve just had your hair done.

The best part about setting off so close to the islands, and taking the high speed option, was that we arrived at the hidden beach entrance a full half hour before the two hundred other tourists arrived. 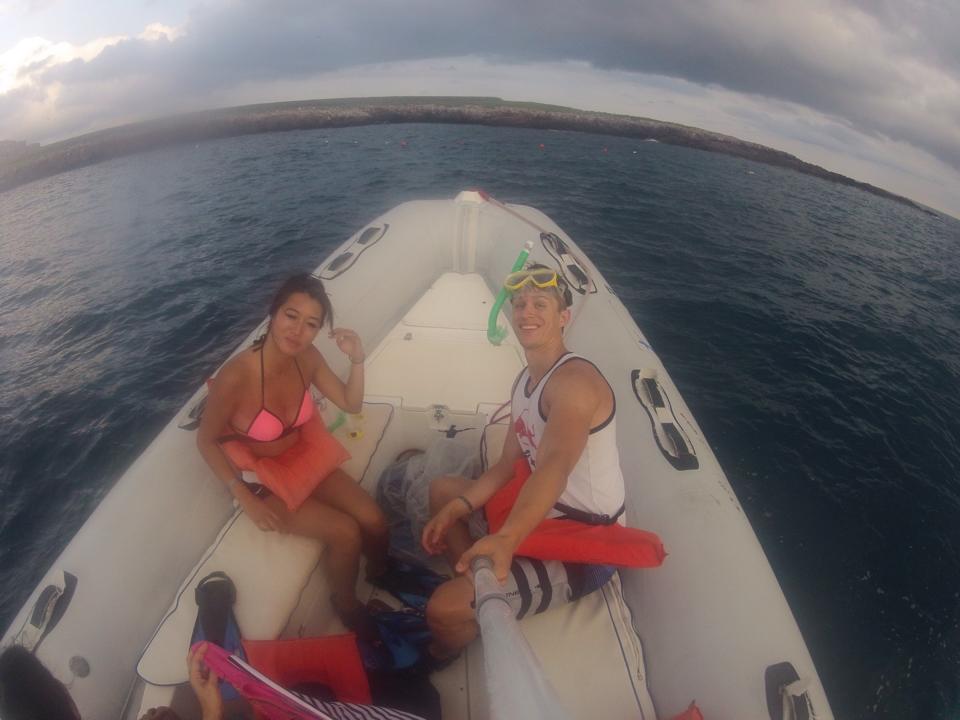 When we arrived, we all jumped in the water and were given mandatory floats, goggles and fins. It kind of made it less romantic, but it seemed like a small price to pay for a chance to experience the incredible hidden beach we’d heard so much about. 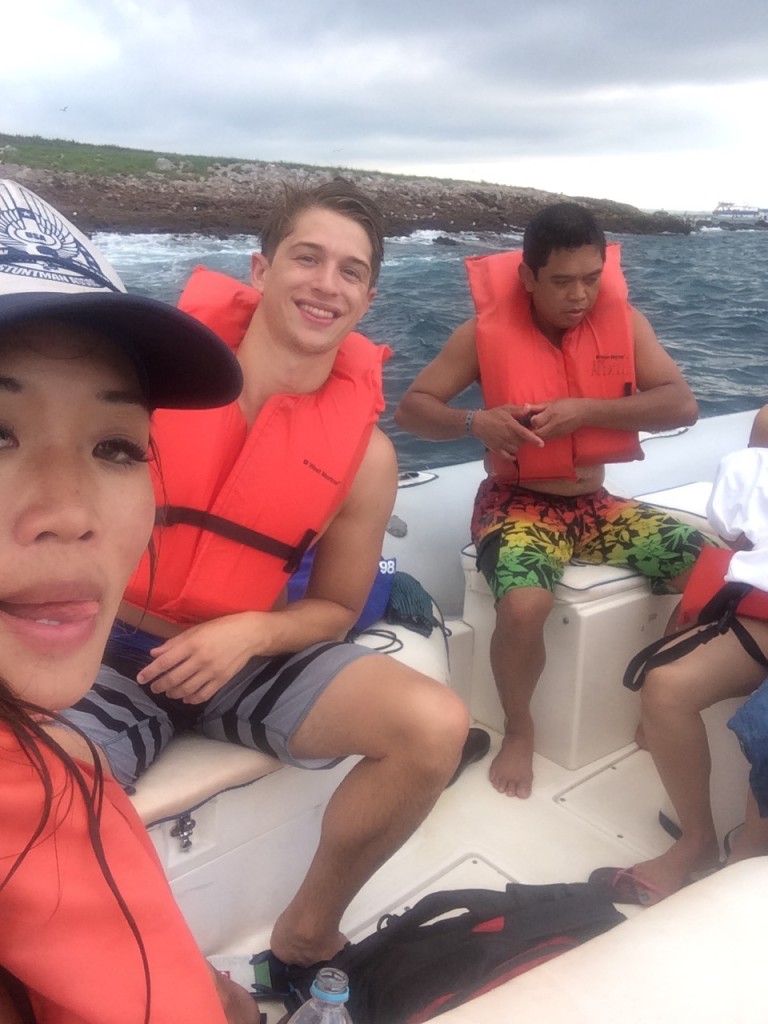 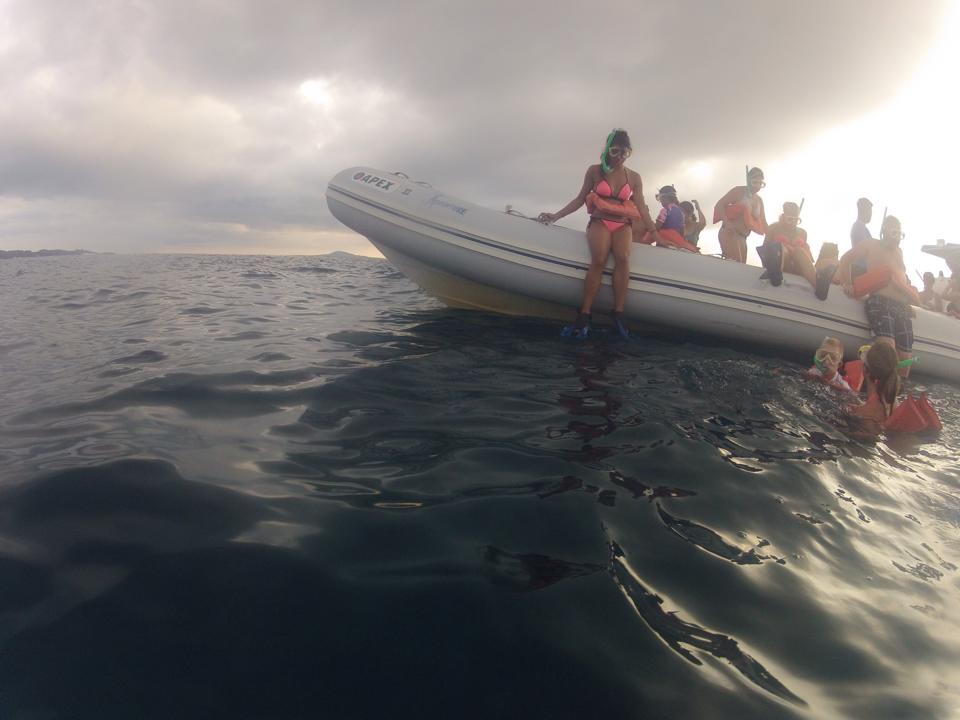 Once we were in the water, we were told that we would be going through the gap in pairs and would have to swim like crazy when our guide gave us the go ahead. As we were the first group of the day to the island, we realized that we were pretty much the only people all day that would have a chance to get the beach to themselves for a few minutes. And out of our group, the first pair would obviously get the beach to themselves…briefly.

Now, feel free to disagree with my philosophy here, but when it’s between you or someone else competing for a unique and once in a lifetime opportunity, I firmly believe you have to put yourself first. Sure, if it means you’re going to drown a kid to be the first one on the beach, then probably (read definitely) let it go, but if it’s first come first served, then quite frankly, be selfish. Screw chivalry and paddle like crazy.

In this particular instance, we didn’t fly half way around the world and get up at the crack of dawn only to step aside and let someone else get that bucket list moment. So you can be damned sure that Lou and I were off that boat and paddling our hearts out the second we touched the water, and if you plan to come to Hidden Beach, I would 100% recommend that you do the same. I promise you it’s worth it. 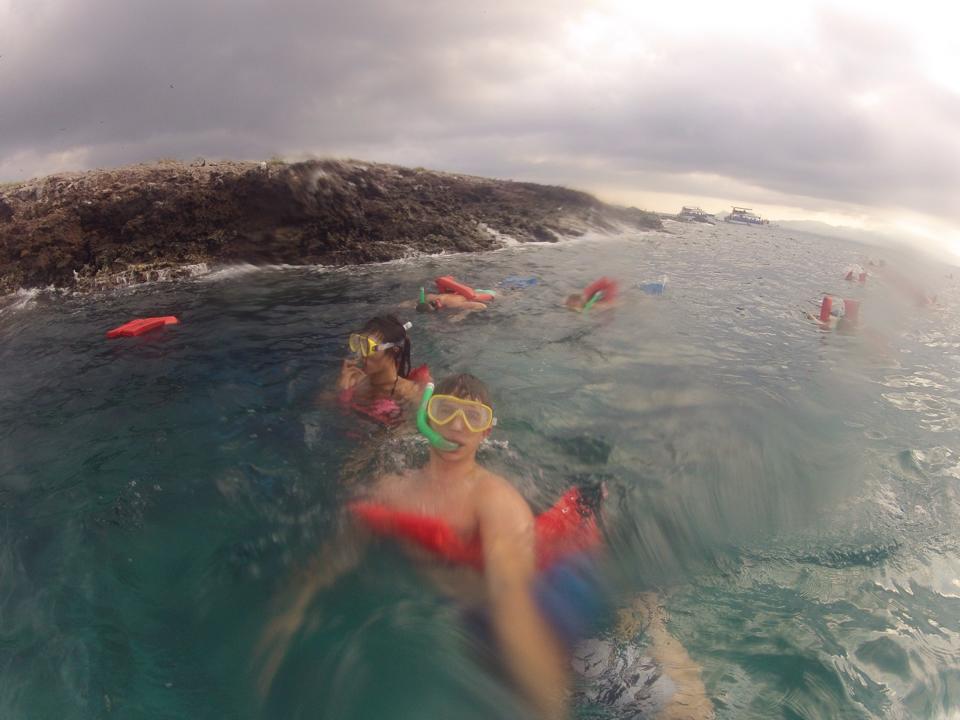 Paddling through the breaking waves and emerging alone in this incredible secret hideaway was just unbelievable, and every second Lou and I had to ourselves was something we’ll never forget. 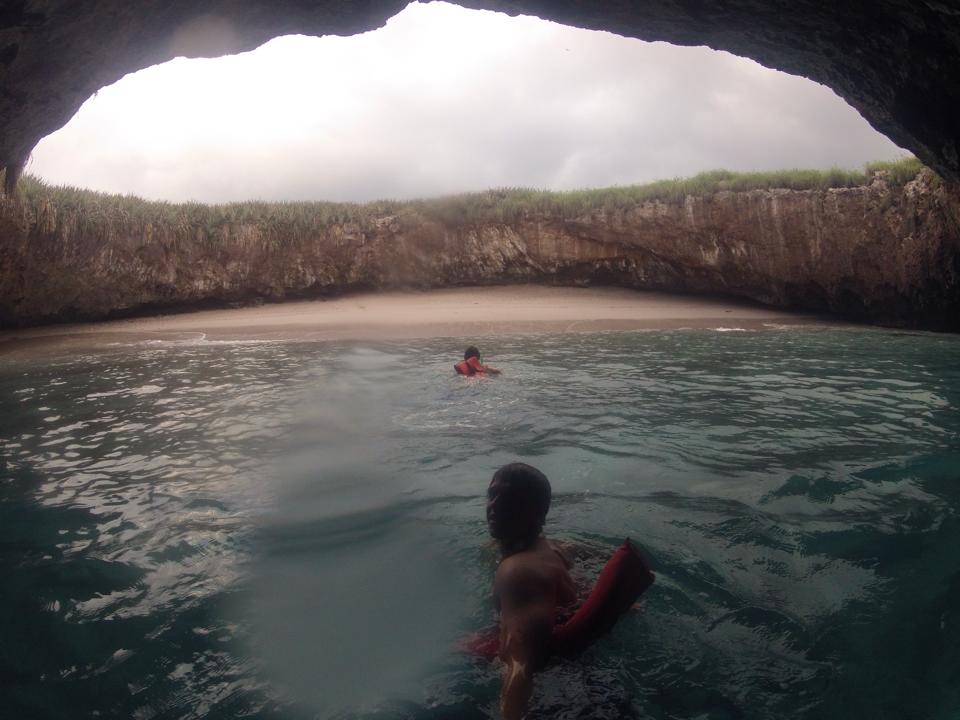 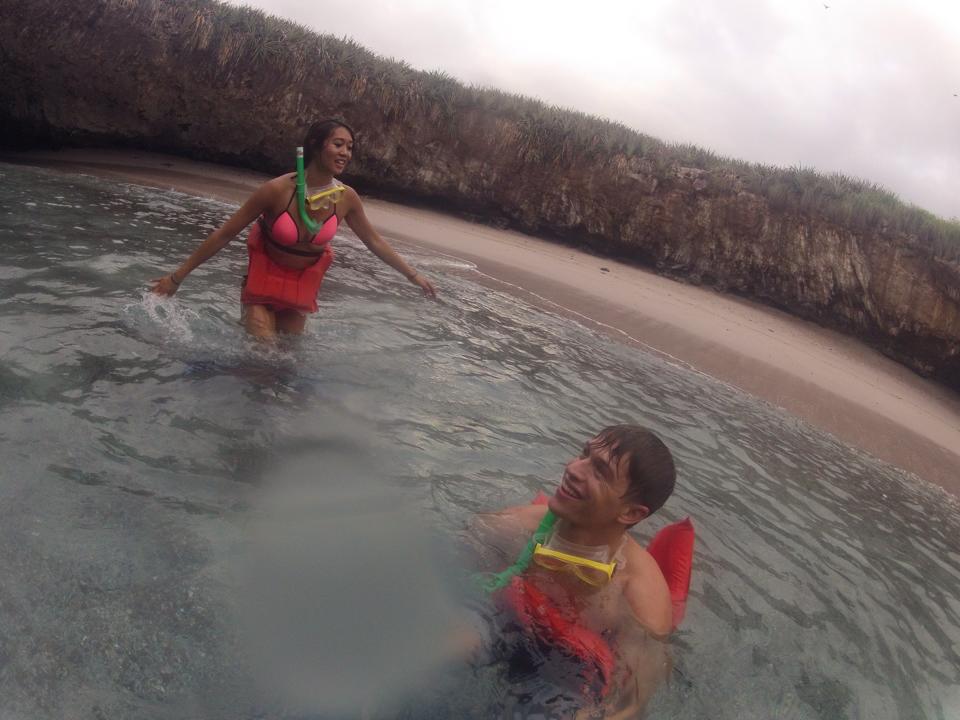 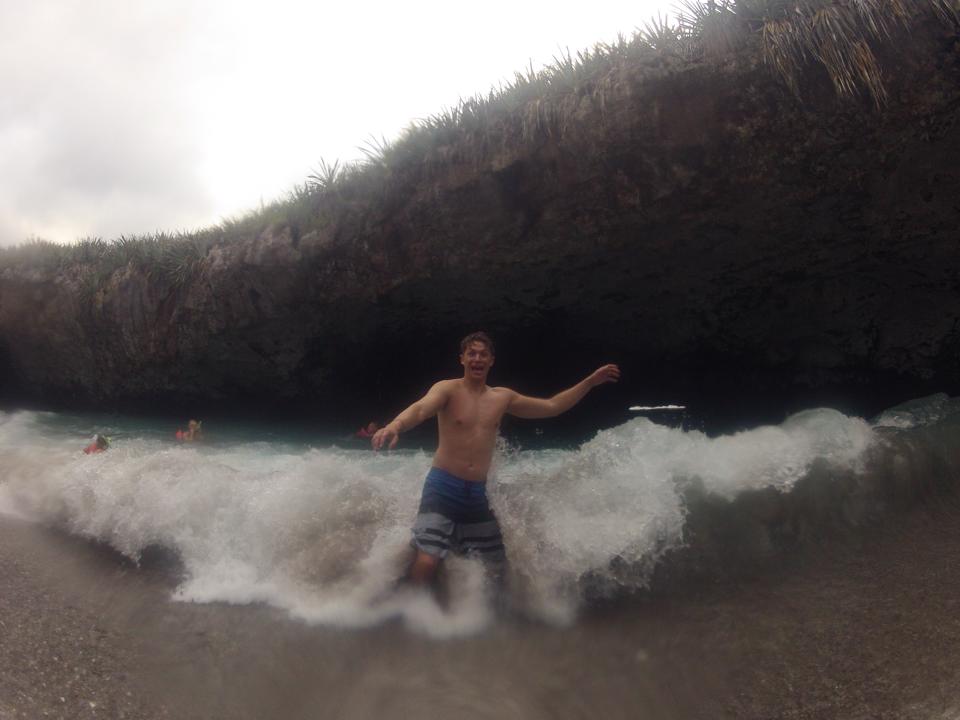 We frolicked around in the waves and took in the playa del’ amour as gradually more and more people from our group arrived. Even our small group made the beach quite crowded, and this was the real moment that we realized what hell the day trip on the big boat would have been.

Other Activities at Hidden Beach

Once we’d used up our allotted time on hidden beach, we paddled back out of the gap and snorkeled around the coast a little. It was quite a grey day and the water was pretty murky, but there were still lots of fish under the surface. Actually, watching the huge flocks of birds above the water seemed to be much more of a spectacle, and I spent most of my time paddling on my back enjoying the show.

After a little bit of snorkeling, we hijacked a couple of paddle boards and sea kayaks from the large catamaran that had arrived and took it in turns floating around the waves, and laughing as each of us took turns to face plant in the water and paddle around our boat. 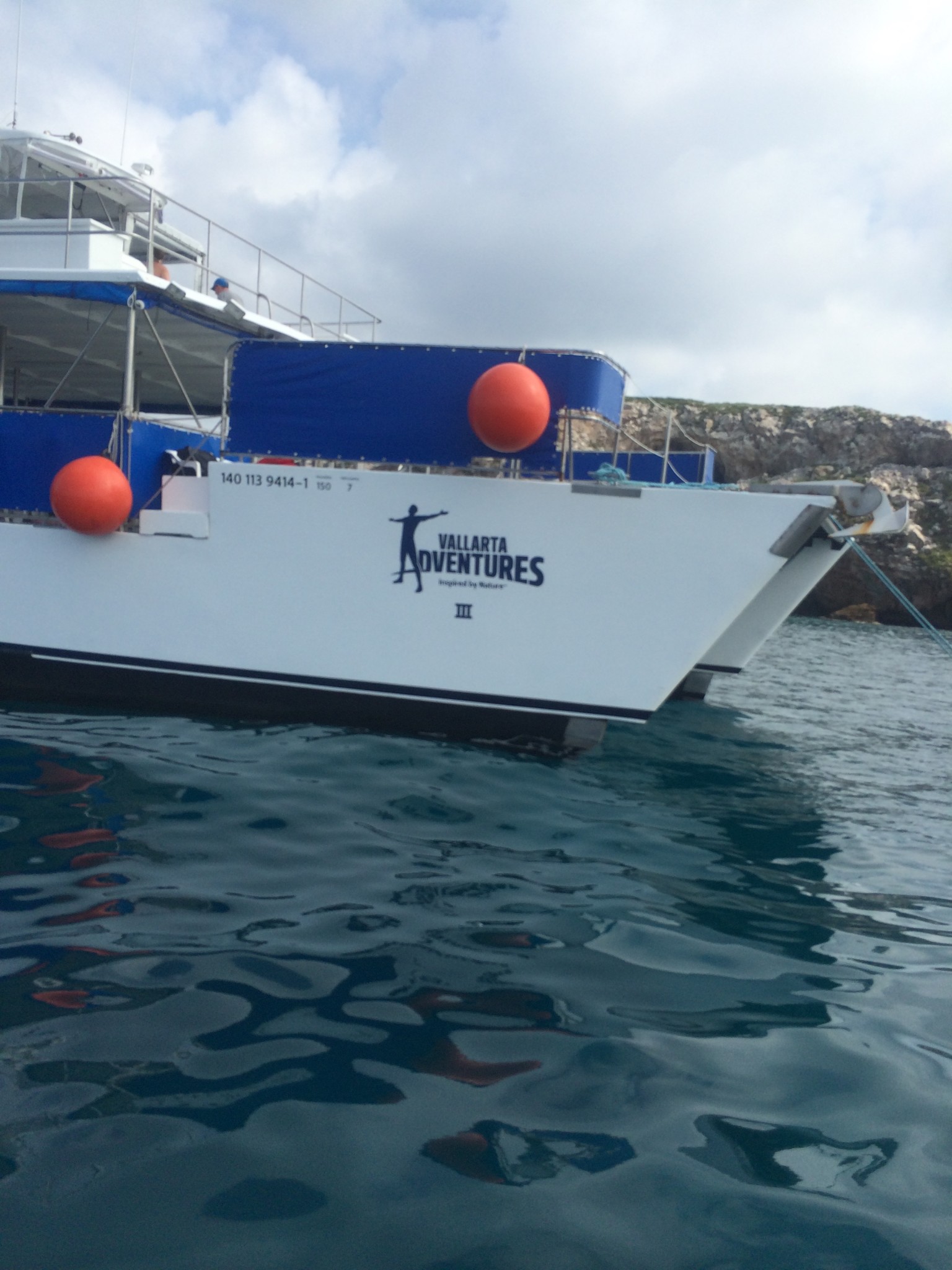 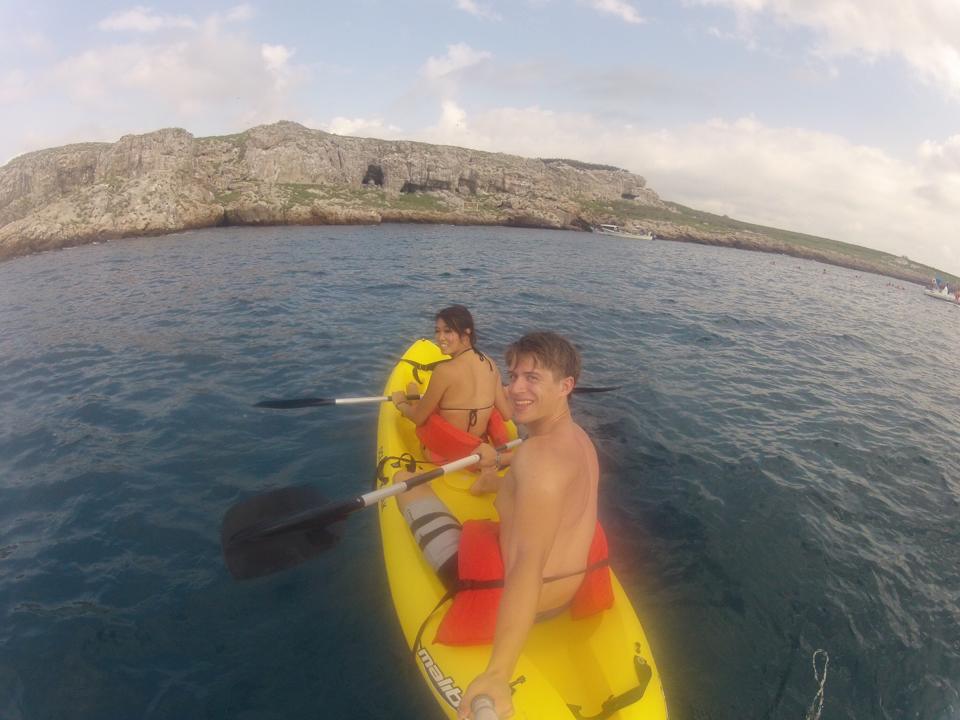 Once we’d finished having fun, we did a lap of the island and explored some of the other craters on the island from the boat. It was really an indescribable experience that should be on everyone’s bucket list. Our guide was a marine biologist who wowed us with interesting facts and stories about the island, and it all added to our experience. It almost felt like we’d had a private tour, and we were so grateful to our concierge for suggesting we contact Vallarta adventures to book the smaller boat tour. If you’re considering a trip to Mexico, this place HAS to be on your to do list. 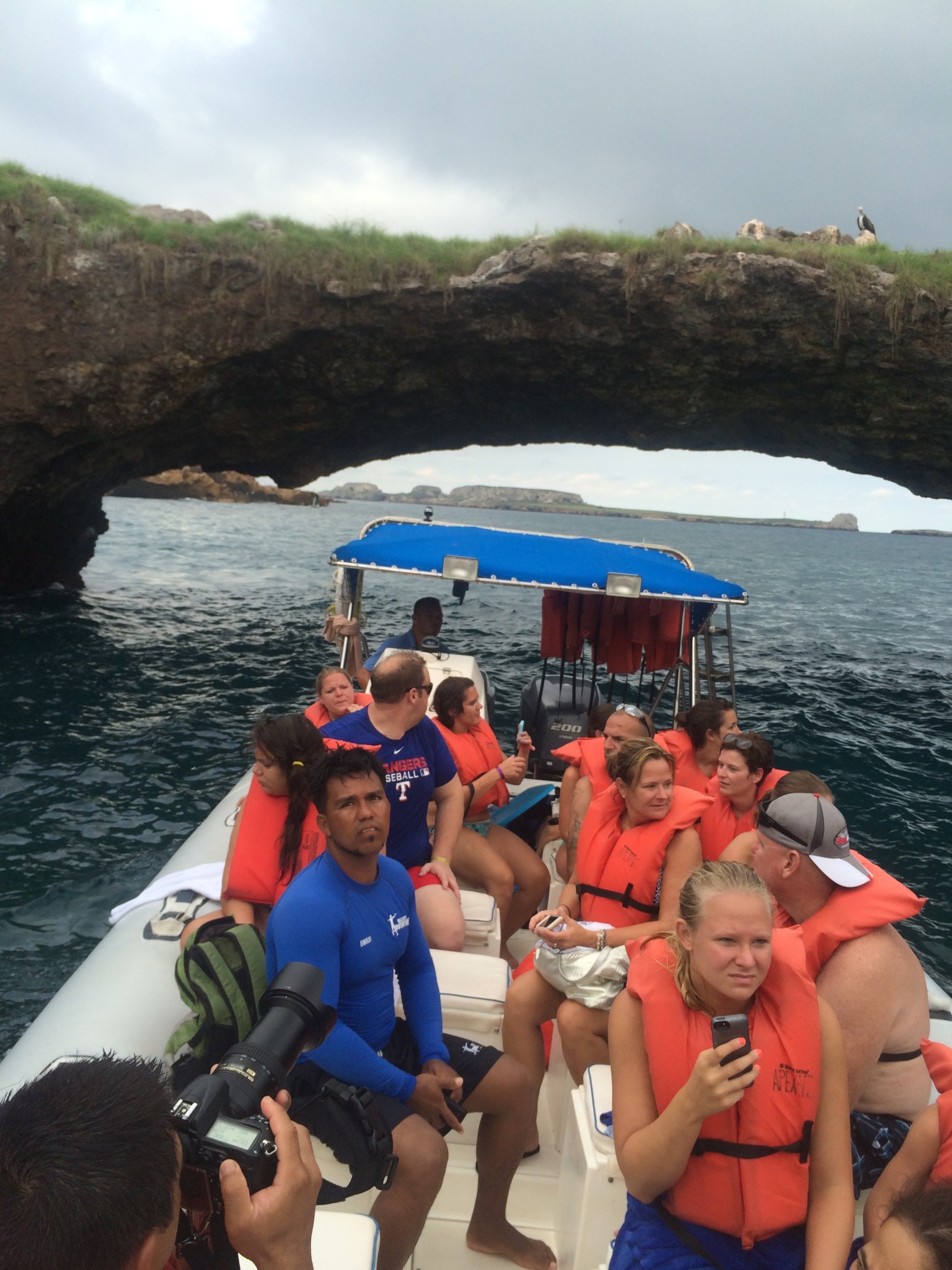 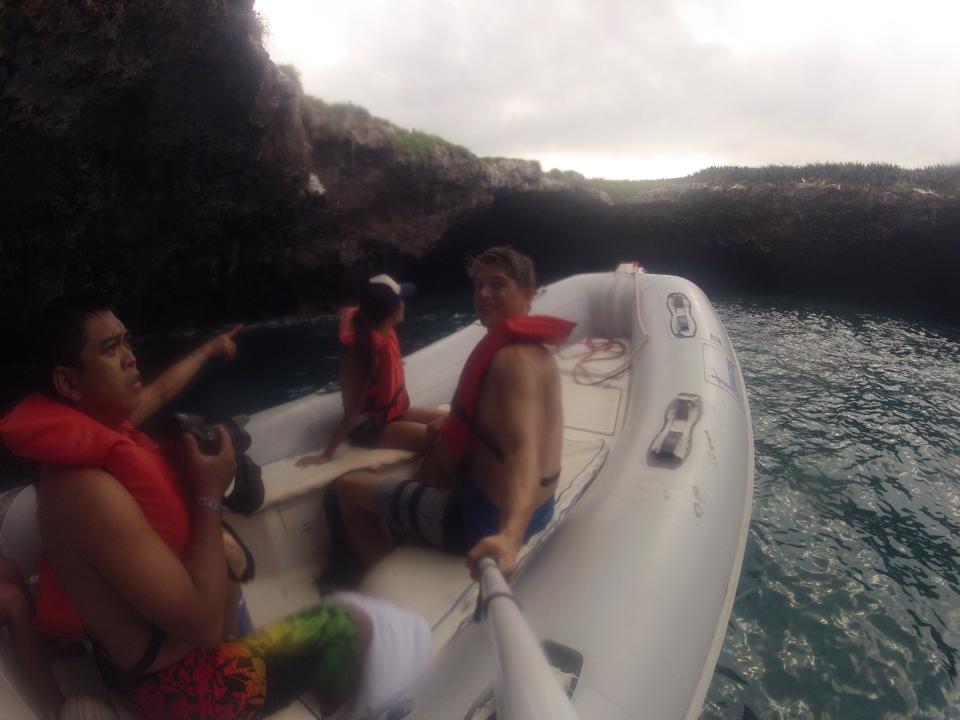 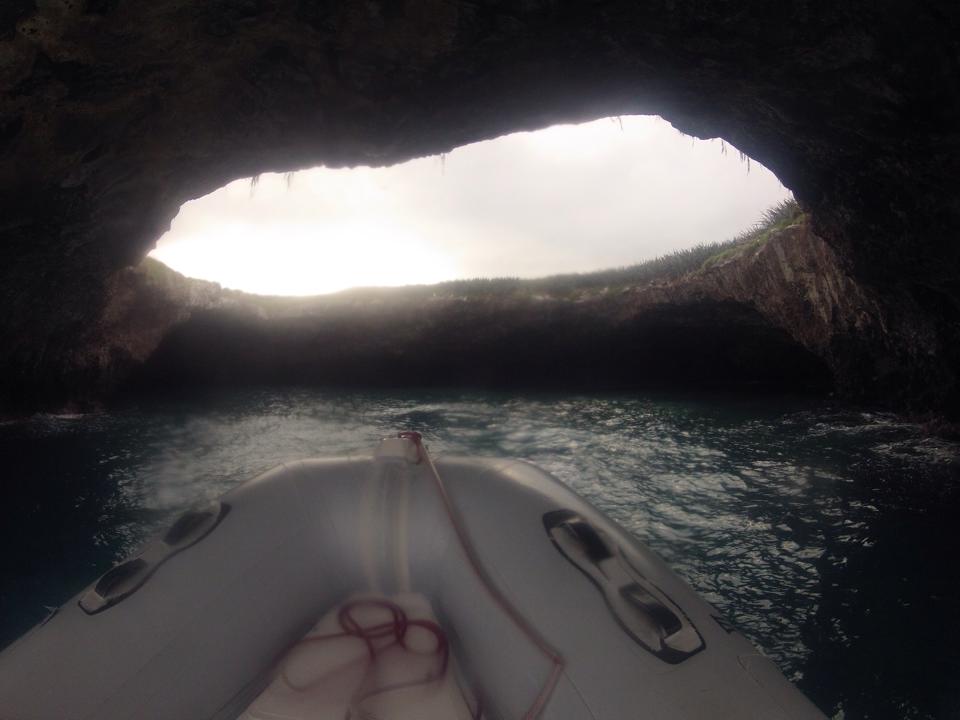 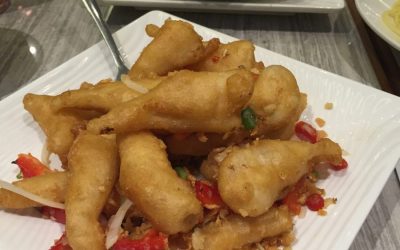 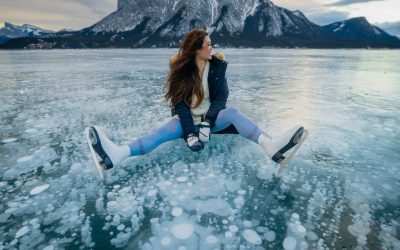 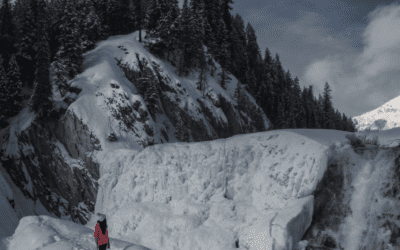 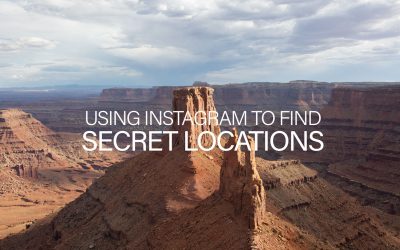