Seeing the Pitons in St. Lucia

St. Lucia is somewhere I’ve been fortunate enough to visit before, so this was the only island on our cruise (aside from Barbados) where I had some previous experience. Feeling like an expert, I knew exactly which St. Lucia excursion I wanted to go on and the places I wanted Louise to see.

Stepping off the boat amongst the bustling crowds, I saw the familiar outline of Castries; a town I last visited for its famous ‘Carnival’ – a festival that takes place annually between June and July. If you’ve never been experienced the excitement and mayhem of the St. Lucia Carnival, I highly suggest you put it on your bucket list.

St. Lucians seriously know how to party, and the booming music, energetic dancing and vibrant outfits make for an unforgettable experience.

Louise and I wanted to explore by ourselves this time, and quickly realised that we’d need a private driver for the day. The usual excursions looked interesting, but I wanted to show Louise the Pitons and some of the southern parts of the island and a tour would have taken us completely in the wrong direction. The only option was to pony up and find a driver at the port.

Finding a Driver in St. Lucia

Be warned, private drivers aren’t cheap, and they will definitely try to charge you an arm and a leg.

For an entire day (8.30am to around 3pm), our driver charged us around $120 USD. We used a company called “John’s Taxis”, and after reluctantly paying up front, we were introduced to “Sarge”, a retired police Sergeant who was now a part time taxi driver.

Sarge was an absolute gem that kept us entertained with stories about life in the Police force, and he was clearly well liked and quite popular throughout the island. Everywhere we went, people recognised him and shouted greetings in our direction. He’d worked in virtually every town along the drive, and proudly gave us his local’s tour. 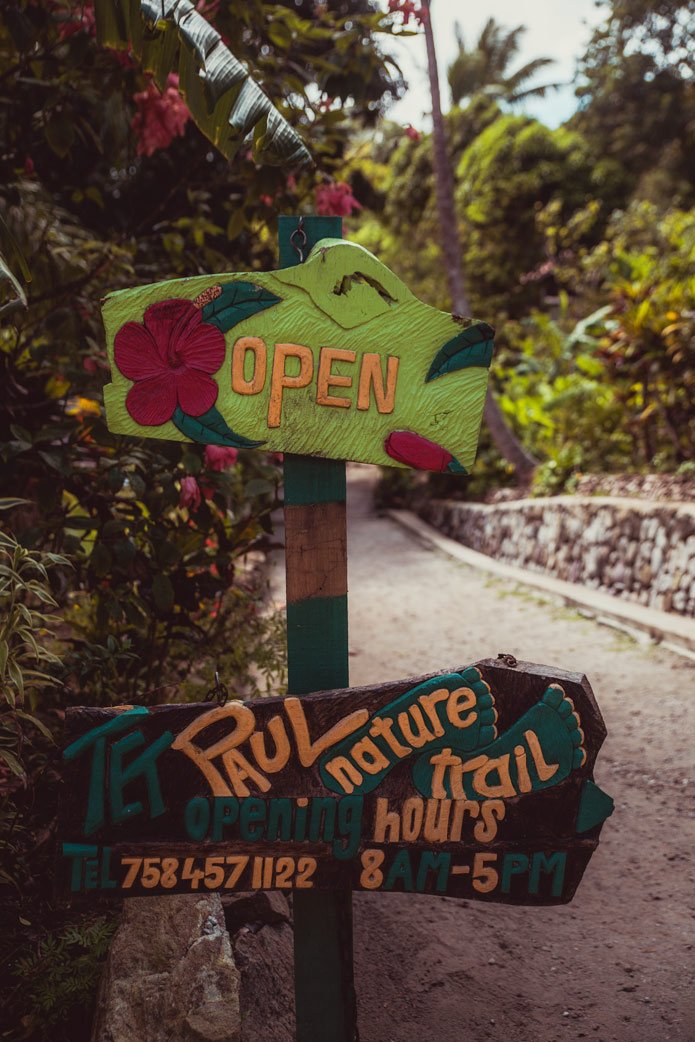 Seeing the Pitons up close was our major objective for the day. Louise hadn’t seen them before and I felt like we couldn’t leave without getting a decent view of them.

Knowing that we wouldn’t have time to climb the Gros Piton, as I’d done on my previous visit, we found the next best thing; the Tet Paul Nature Trail. Of all the excursions I’ve done in St. Lucia, this might be one of my favourites!

The Tet Paul Nature Trail is a privately owned trail on a piece of land nestled perfectly between the Gros Piton and the Petit Piton. It lies atop a small hill, and the short trail runs in a loop around it. It’s extremely short easy, although there are a few steps along the way.

As the Tet Paul Trail offers some of the best views of the Pitons, the owners decided to turn it into a wonderful little interpretive trail and allow the public in.

We paid our $10USD each, and were assigned one of the family members as our guide. Sarge, our trusty driver, decided to tag along for the walk and promised us that if the guide started telling porky pies (lies), he’d be there to set him straight for us. 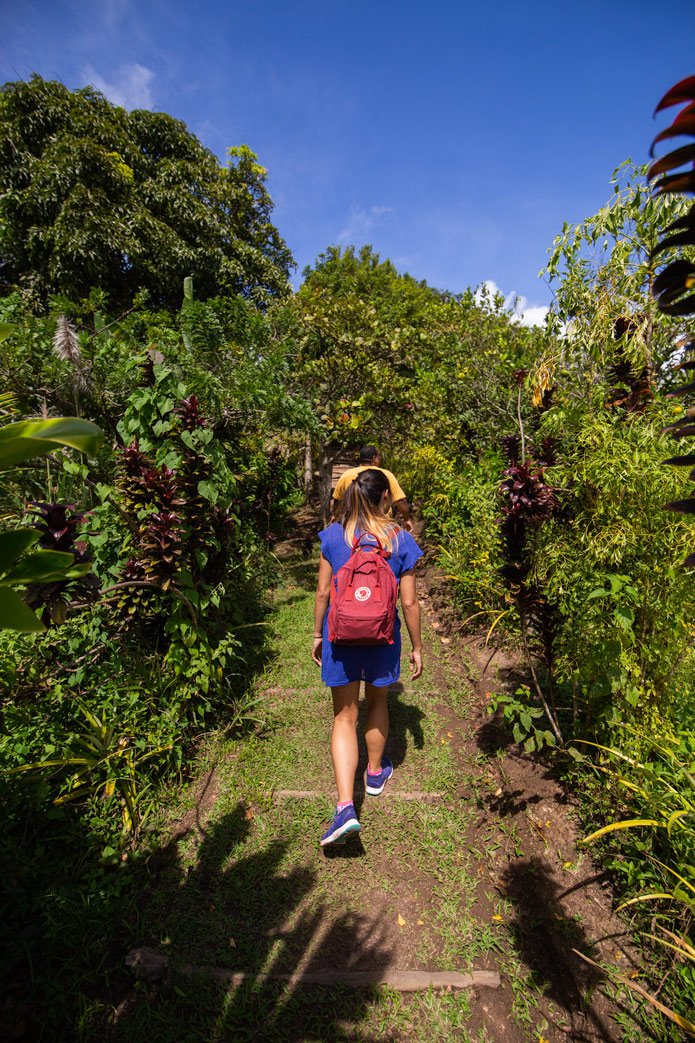 But it wasn’t necessary. The guide told us about his family’s history in the area and about the towns you could see from the hill as Sarge nodded quietly in agreement. In particular, he pointed out a town at the foot of the Gros Piton called, “Fond Gens Libre” meaning “the valley of the free people”. It was a town of huge local importance because during the times of colonial slavery, any escaped slaves could find sanctuary there.  Our guide told us that some people even spent years hiding on top of the Piton, such was their fear of persecution for escaping.

Panoramic Views of the Pitons

Moving on, our guide showed us a rich vegetable garden full of chilies, peppers, cucumbers and even pineapples as we made our way to the spectacular panoramic view of the Pitons; the highlight of the tour. 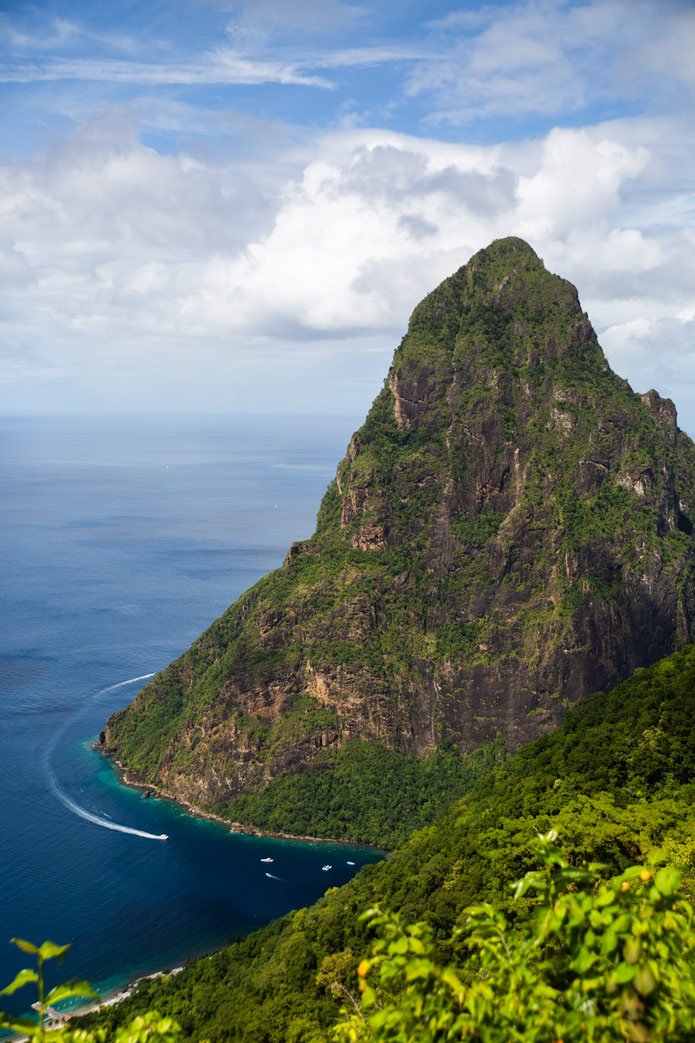 From the viewing platform, you could also make out the famous “Sugar Beach”, a small beach famous for its excellent snorkelling and expensive hotels.

Finally, our guide led us to his grandparents’ original home. He proudly showed us the ingenuity of his relatives; how they managed without power, created tools and recycled clothing into mats. It was actually very impressive and a nice way to finish the tour. 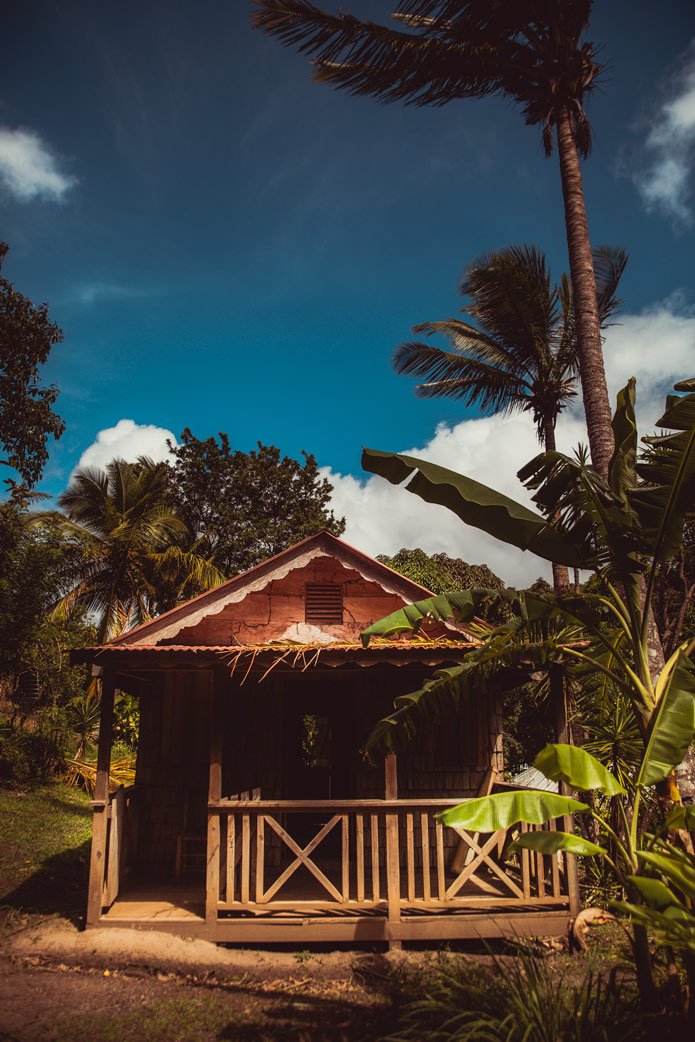 Sarge particularly enjoyed the tour and gave it his seal of approval, saying that he’d definitely be bringing more people back again.

Considering the time we had at our disposal, I’d say this was a nice place to visit to get the best views on the island and learn a little about its history. Given the distance though, I’d probably recommend doing this only if you’re staying longer than a day.

It’s also not too far from Hotel Chocolat if you fancy a chocolate themed fancy lunch/dinner afterwards. Last time I was here I had an interesting steak with Chocolate sauce!

Lunch and a boat ride in Soufriere

After our trip to the Pitons, Louise and I decided to grab some lunch in Soufriere. Last time I was here, I remembered it feeling a little bit sketchy, but this time it had a completely different vibe. Sarge guided us into a local chippie for some lunch, and we both did our best to order something tasty off the menu. Louise went for some BBQ wings and I opted for a roti full of chicken curry.

The roti was pretty tasty, but absurdly messy and absolutely full of chicken bones. For a $3 lunch, you kind of get what you pay for I guess.

With a face stained yellow from the curry, Louise and I roamed the streets until we bumped into a guy that practically dragged us onto his boat for a tour.

$20 later and a few stern words from Sarge, we found ourselves flying across the waves on a beautiful fiberglass boat. Louise was keen to get a view of the Gros Piton from the sea, and I felt like going for a swim, so a lunchtime boat ride was perfect.

If you’re thinking you might like to do the same thing, just head to the water in Soufriere and someone will find you, no need to look too hard. With that being said, if you want to ride with a reputable company and not just some guy that was out harassing tourists, you might want to do a bit more research than us, or head to Sugar Beach. 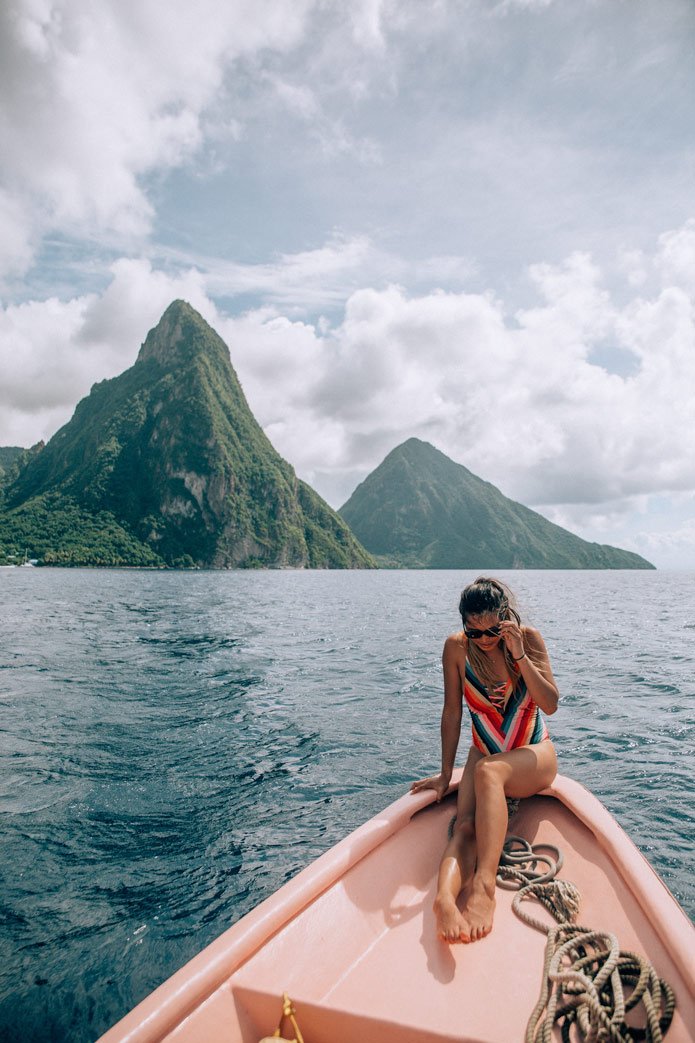 Back to the Cruise Terminal

After what only seemed like a couple of hours, it was already time to head back to the cruise ship. Sarge was starting to worry that we’d be late for our boat,  and Louise and I were craving a pizza back on board the ship. We decided to call it a day then, but not before making one last pit stop so that Sarge could buy an enormous avocado. Unexpectedly, he started eating it on the spot and insisted on sharing it with us as well. Admittedly, it might just have been the best avocado of my life.

Although our time in St. Lucia was over in a heartbeat, it was easily one of our favourite ports. The people are one of a kind and the landscape is so spectacular that I’m sure it won’t be our last visit.

This post is sponsored by Carnival Cruises, but all opinions are our own.

Want to read another blog post from our cruise to the Caribbean? Check out our trip to the Baths in The British Virgin Islands. 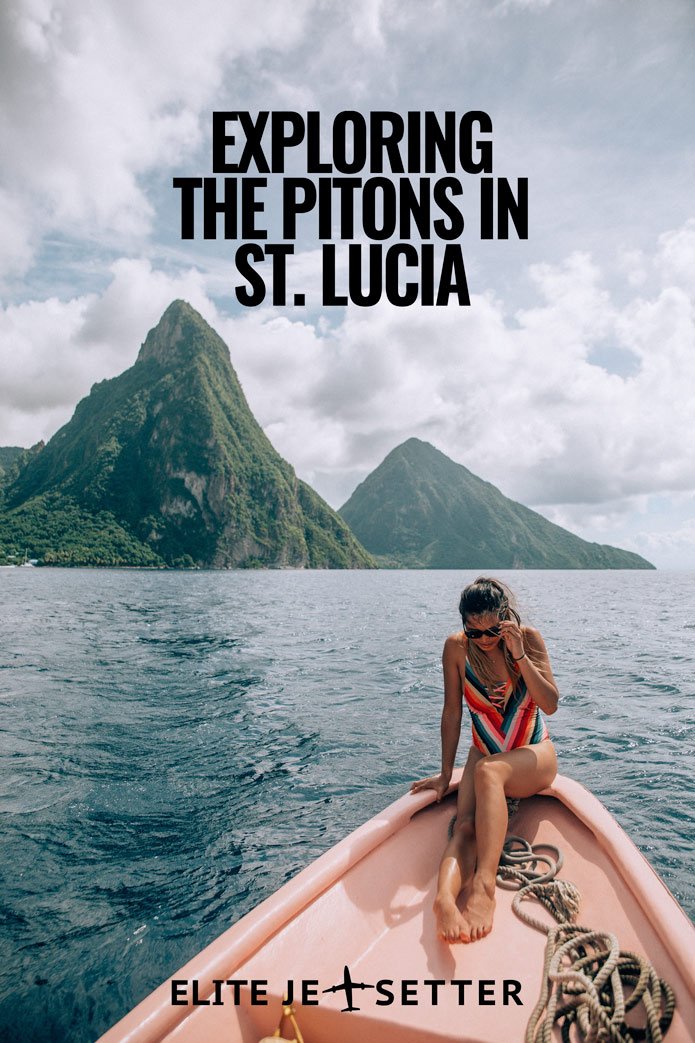 Tweet
Pin36
Share
36 Shares
← Prev: 7 Tips for Staying Healthy While Travelling Next: The 10 Best Locations for a Romantic Photoshoot in Banff → 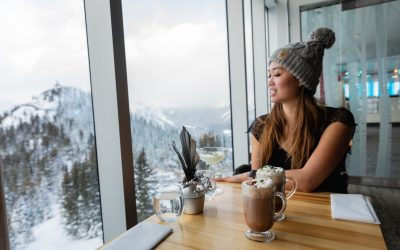 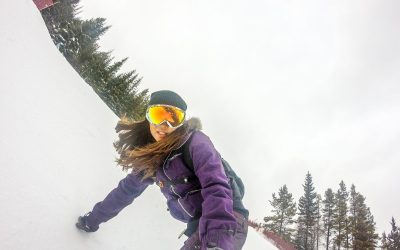 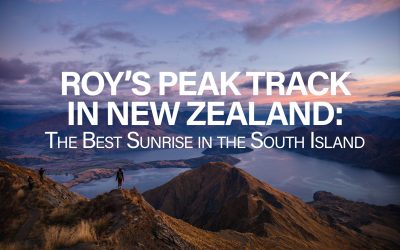 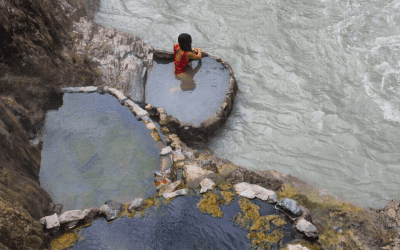