This weekend we were guests to the grand opening of the Sunshine Village Heated Chairlift at Teepee Town. We’d been waiting with anticipation since its announcement, and the thought of finally being able to take the Teepee Town lift without having to worry about losing our fingers to frostbite was something that had us very excited indeed!

The old Teepee Town chairlift was definitely something that was to be avoided at all costs. If you were lucky enough to survive being scooped up at Mach 3 by the rickety old two person chair, you were in for what felt like an eternity of huddling and cursing on the slowest lift in the resort.

Thankfully, all that has now changed forever with the introduction of the Teepee Town LX heated chairlift. The meagre two seats have now been replaced by a four person bench, and not only does your frozen behind now benefit from gloriously heated seats, but there is also an amazing pull-down lid to shield you from those biting winds. We had a few rides on the lift and, honestly, what used to be the worst lift is now the jewel in Sunshine’s crown!

I don’t know about you, but in the past I would rather have taken the gondola back up from Goat’s Eye than what I would call ‘the more interesting route’. All that has now changed, and the new lift promises to bring new life to a part of the resort that was once really nothing more than a deserted outpost. Actually, there are some incredible runs that lead to the teepee town lift (the shoulder for example), and hopefully now more people will give them a chance now that it’s so much more comfortable.

Anyone reading this from Europe might be keen to point out that heated lifts have already existed there for a long, long time, but let me tell you that this is a first for Canada, and HUGE news for anyone that regularly frequents the Rockies for winter sports.

Of course, we didn’t spend all our time just admiring the chairlift this weekend. Having spent most of my ski hours at Sunshine, it always feels like coming home, and finally after 9 months of waiting, it was time to get back out and shred again! As expected, the much anticipated El Niño has brought a lot of great snow already, and there are loads of great runs to be skied. Much of the top of Goat’s Eye is still closed, but the rest of the resort was looking fantastic with a good layer of thick snow.

We normally take a heaps of photos, but we thought we’d have a bit of fun making a video this time instead!

If you’re interested in reading more about it then there are a few more cool facts about the Sunshine Village Heated Chairlift on their website. If you have any more questions or are interested in planning a trip to Sunshine for some skiing, then feel free drop me an email at [email protected] Happy shredding! 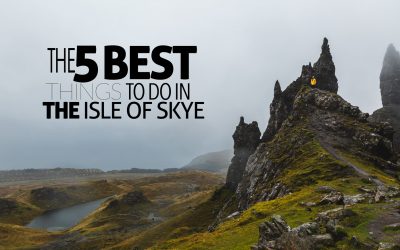 5 Things to do in the Isle of Skye